Within this building of Mantodea's Spawn you can find the altar of Champions. 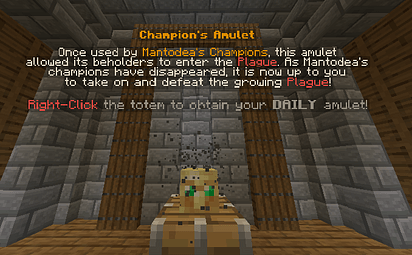 The Altar of Champions

Right-Clicking this altar every 24 hours rewards you with an Amulet.

Once you right-click the Amulet, you will be transported into the Plague! 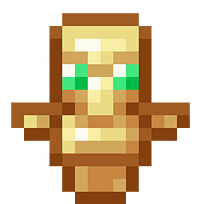 The Plague of Mantodean Legend

To enter the Plague, a Champion's Amulet is needed. Upon right-clicking the Amulet you will be transported to the Plagued Dimension.

Before the onslaught begins, you will need to select one of three styles of classes - ranged, bulky, or attacking. You will have 60 seconds to do so and you will then be thrown into the arena.

The plague is an entity that desires to drain everything of life that stands in its way. Almost bringing Mantodeans to their demise, the Mantodean Champions stepped in and defeated the Plague. However, as the champions have disappeared over thousands of years the Plague has begun to regain power. With the seal cracking, the new army of Mantodeans has the responsibility of keeping the Plague in check and to fight back with the power of Mantodea's Champions.

Worn by Mantodea's original Champions, the amulet allowed safety from the corrupting and overwhelming power that the Plague gives off in its own dimension. The Altar gives players a new amulet every 24 hours in the Mob Arena section of spawn.

As the waves increase in number, they also increase in difficulty. Mobs will have more health and in most cases will do more damage. Make sure to spend your coins wisely and coordinate classes with your teammates.

Every 10 waves, there is a boss round. These mobs will have a lot of health and will pack a serious punch. Be smart and careful with your actions and you will be able to overcome their power!

Every 10 waves, upon completion, you will be rewarded with a Wave Key. Wave Keys provide some awesome rewards, including Capsules, Booster Boxes, Cash Boosters, and Universal Atlases!

You can get a maximum of five keys for every game played, so try to make the most out of every game you play! The Plague almost wants you to get at least key, so you are likely to receive one every game! Good luck and have a fun time fighting off the Plague.

The Plague sends 50 waves of Plagued minions before the final boss appears. However, it is very difficult to make it to this point. This is where your participation and teamwork will determine your success in the arena. There is a maximum of four players per game, so make sure to plan out when you take on the Plague.

You will be given a coin for each time you kill an entity from the Plague. These coins can be seen on the scoreboard on the right side of your screen. These coins are used to buy items during your mob arena game. To access the shop, you can type /ama shop inbetween waves or /items.

NOTE: Buying effects does NOT stack. Do not try to purchase the same effect multiple times, as it will still charge you.