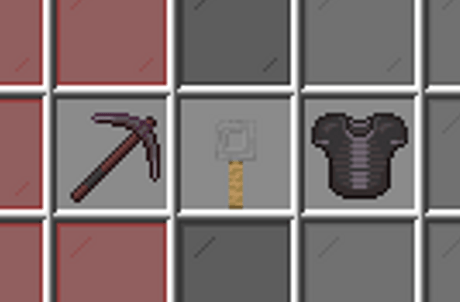 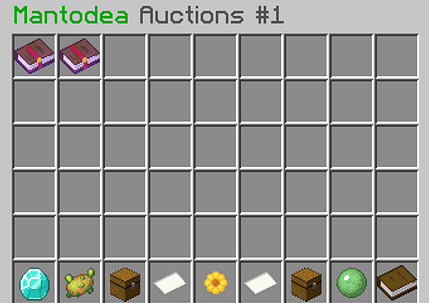 Mantodea's economy is COMPLETELY organized and decided upon by the players. Players can set the worth of items based on how desired or rare each is to the community.

However, it's important that ALL players start somewhere... so follow our guide! We have four easy steps for all players to figure out how to make and use their money for good!

I | Joining your First Job

All you need to do is hold the item you desire in your main hand and type /ah sell [price]!

Once you place an item on the Auction House, players can buy it from you and the money will go directly into your account.

In order to buy items from the Auction House, type /ah . Then, choose the item that catches your eye and left-click it. A second menu will then pop up, allowing you to confirm or cancel the purchase! Easy trading made possible!

The In-Game Shop is a place for players to buy exclusive armor, weapon, and tool sets... even Harvest Keys!

The gear is expensive, but are focused on specific styles of gameplay and can prove useful to players who wield them.

These gear sets do NOT come with Soulbound, which makes them risky to use. Soulbound can be recieved through our Loot Locker after you complete your Monthly Challenge!

To access the in-game shop, simply type /shop and begin browsing through the different categories provided!

Jobs are undoubtedly the best way of making money in the long-term grind of Mantodea.

As their name suggests, Jobs are occupations that players can join, allowing them to make money by doing certain actions.

Jobs pay per unit, which means payment is given to players as they complete a singular action. This unit pay increases with the amount of action an individual completes. As players complete action, they will also receive Job XP, which levels up their job.

Players are allowed up to three jobs that are unlocked at certain Ranks. If you want to change jobs, use /jobs leave [JobName] and join the new job you would like!

Will you be able to reach level 100 in your jobs? The grind will take time but the rewards will be immeasurable!

Custom Crafting and Drops are found on our server! While completing job actions on Mantodea, you may come across an exclusive drop. These drops can be used in a crafting table to work towards making the BEST tools on the server.

Shown above, each job has its own mode of pay, ranging from breaking blocks, fishing, killing mobs, cooking items, enchanting, and more!

Not sure of what job you would like to join? Keep in mind your playstyle of Minecraft. It is most rewarding if you are doing your job without thinking of it.

Curious about a job? Click the icon to figure out more about each of the jobs!

Player Shops create a "Shop Local" atmosphere, allowing players to buy goods from or sell items to other players. A good way to make money and make a name for yourself on Mantodea, it is paramount to your towns success that the creation of shop signs are understood. There are three types of shops players can create; Buy, Sell, and Buy and Sell (demonstrated below).

Player Shops can be placed on Barrels, Single Chests, and Double Chests once you reach Beetle Rank.

Funds made from selling items to players will go directly to your balance.

Costs of items bought by players will be taken from your balance.

Players can both buy and sell their items to you with ONE sign.

Loot Lockers are portable crates that can be opened by right-clicking. They can ONLY be obtained by completing Monthly challenges, and are therefore filled with awesome rewards. Including crafting pieces and two custom enchantment books, it is worth the effort!

Challenges provide different methods of earning money and collecting crafting pieces without leaving it to chance.

Challenges are organized into three categories and their related difficultues: Daily, Weekly, and Monthly [as seen below].

Daily Challenges are designed as a way to make money without having to spend exorbitant amounts of time.

You can complete SEVEN Daily Challenges every day.

Weekly Challenges cater to players who are looking for new forms of profit AND custom crafting pieces.

You can complete SEVEN Weekly Challenges every week.

You can complete ONE Monthly Challenge every month.